Sometime back I ran into a nice article about refinishing a drum on instructables.com. I gave me the idea to (finally) clean up these two "drum sets" I had sitting in my garage. The idea was to give them the same look and merge them into one (very versatile) kit. 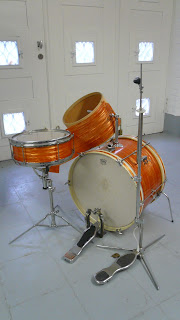 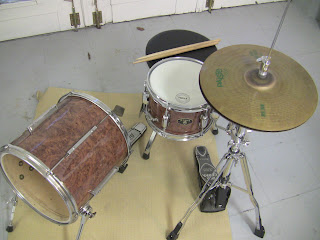 This blog post describes shortly my experience with refurbishing this old "junk" while keeping the cost of the whole experiment as low as possible. In the end I've done a bit more than just refurbishing the shells, but please, read on.

I decided to perform a test run on the 12" tom of the orange set. I ripped off the cover and unscrewed all the hardware pieces. I filled any holes in the shell with wood putty. In order to stay on a budget, I used whatever I had left on the shelf. Clearly a bit to dark for these shells, but I figured the stain would hide most of the difference. (Turns out it didn't, and even worse the stain didn't attach on the putty as it did on the wood.) 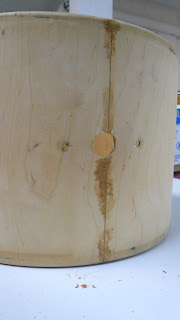 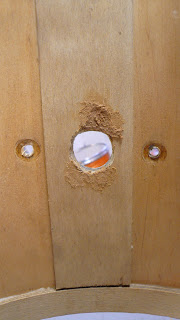 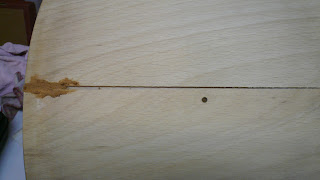 Once that had hardened, I sanded the outside of the shell. I used a small hand machine with sanding paper 200. 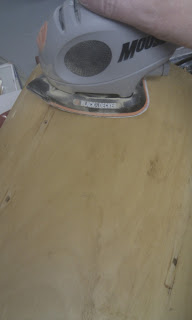 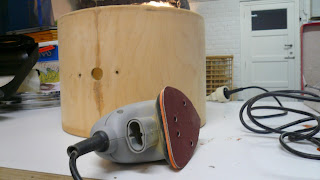 After the sanding it needed some serious dusting off. I order to make sure I got all the dust, I first brushed it up and then I took a slightly humid cloth and cleaned the shell. I repeated that a couple of times until I was sure all the dust was off and the shell was ready for painting.

Next step was actually starting to apply the stain. I just used a brush and tried to apply the stain as equally as I could. After a first treatment with green stain, the drum looked like this. (Shell and remounted.) 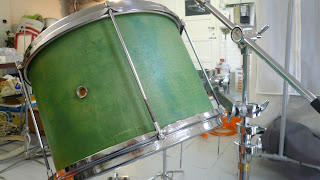 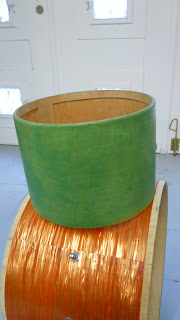 I'm not sure whether the result of the staining was so 'unequal' because of my lack of technique, or because of the quality of the wood, any remains of glue, or anything else. Even though it might not show on these picture, I thought a second treatment would be appropriate. You'll see the result below.

In the meantime, I had treated all the hardware of the tom, with metal cleaner, so it was all shiny again. Before mounting the drum again, I decided to add some muffling to all the screws. I don't like rattling pieces in my set, so I decided to make sure that wouldn't happen. My wife likes the house to stay clean, and in front of the door that leads up to the house, she always puts a floorcloth. Now this floorcloth seemed to be made of something felt-like which could easily be cut. I cut of a large piece (2 cm wide the whole side), and used that to create the "mufflers" for the screws. (Up to today I don't know if my wife noticed the floorcloth got smaller.) 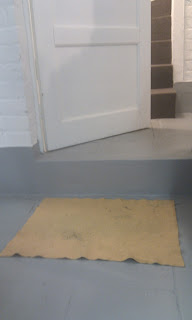 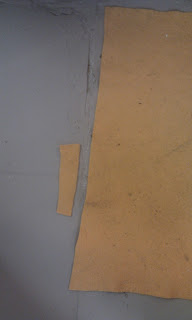 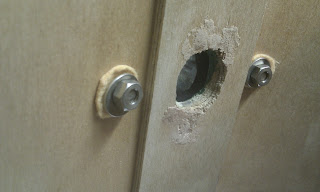 To muffle the tom mount, I cut out a piece of a mousepad. Mousepads are freely available on the planet earth. Websites as freepage.be or gratis.nl will help you locate your "donor". 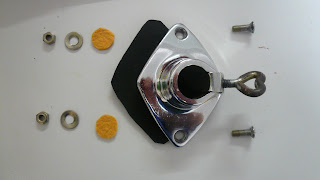 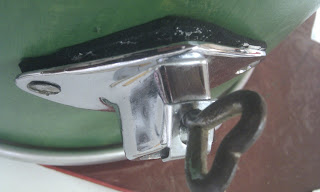 When applying the second layer, I put the stain on a bit too thick. As a result, I found the green a bit to dominant and unfortunately the (grain of the) wood wasn't 'shining' through anymore. Still the option with the second layer was better than just a single layer. With the second layer of stain on the shell, and the clean hardware remounted, this is what the tom looked like. 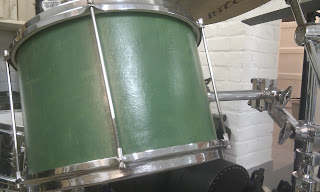 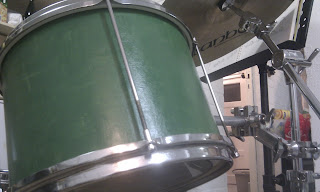 While I was in doubt of applying a layer of transparent coating to protect the shell, I decided finally not to add the coating. The stain itself already hade a nice shine to it and while I intend to carry this kit around to all possible places, I also plan to take care of it.

All in all, not such a bad result, so I went ahead with the rest of the kit. The results you can see in part 2 of this post.

Email ThisBlogThis!Share to TwitterShare to FacebookShare to Pinterest
Labels: Do it yourself, My gear